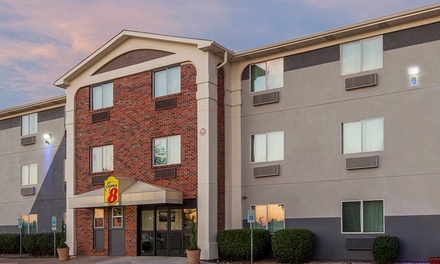 Bedford hotel with free WiFi and breakfast; about 21 miles from both downtown Dallas

The Super 8 gives guests a comfortable spot to rest up when visiting the Dallas-Fort Worth area. Rooms come outfitted with microwaves and mini fridges as well as free WiFi. The hotel’s free breakfast helps kick-start mornings with options such as waffles and yogurt. Check out other hotel features:

Though some know Dallas only for the massive AT&T Stadium (which is actually in Arlington), the city is also an enclave of arts and nature, overflowing with botanical gardens, art galleries, and live theater. Historic Main Street connects many of the city’s recently rejuvenated urban districts, as well as the popular Main Street Garden, a block-long public park surrounded by architecturally significant buildings.

A short walk from downtown Dallas, you’ll find horse-drawn carriages clopping along brick streets in the city’s historic West End district, which dates back to the 19th century. This part of the city also contains Dealey Plaza, where President Kennedy was assassinated in November 1963. At The Sixth Floor Museum at Dealey Plaza, housed in the former Texas School Book Depository, you can visit the spot where Lee Harvey Oswald is believed to have shot at Kennedy’s presidential motorcade.

24-hour cancellation notice required prior to check-in or reservation is non-refundable; reservations made within cancellation window are non-refundable. No-shows will be charged total Groupon rate. Traveler name must match ID at time of check-in. No refunds will be processed by Groupon after check-in. Must be 21+ to check in. Credit card required at check-in. Rates may vary by date and are subject to availability. Dates cannot be changed once booked; valid only for night(s) purchased.