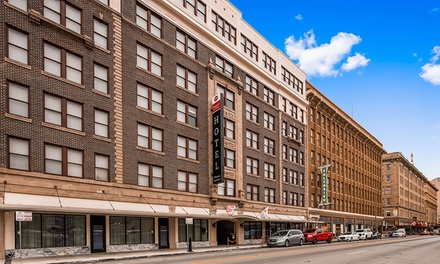 Constructed in the early 20th century, this former traveler’s inn is within walking distance to the Riverwalk and the Alamo

Built as a traveler’s inn in the early 20th century, the newly renovated Best Western Premier Historic Travelers Hotel preserves the charm of the original iteration of the building while adding modern decor and conveniences. What’s more, the property is within walking distance to some of San Antonio’s most popular attractions, including the historic Riverwalk.

Downtown San Antonio: Skyscrapers and the Alamo near the Original Riverwalk

In the late 1920s, architect Robert H. H. Hugman designed an urban park around the San Antonio River. He envisioned a space that would be the American version of Venice, where people could shop and dine along the waterfront. The original section, a 2.5-mile riverwalk running through downtown, was completed in 1941. It’s been a vital artery in the heart of San Antonio ever since; so vital, in fact, that the city added two extensions in the 2000s—Museum Reach and Mission Reach—that elongated the riverwalk to 15 miles total.

Located one story below street level, the downtown section of the riverwalk bustles day and night. Stone pathways on either side of the river wind past waterfalls and public art installations on their way to restaurants, boutiques, and lively cantinas that stay open well into the night. Downtown San Antonio is also where you’ll find the Alamo. The historic mission-turned-fortress is one of the most visited tourist sites in the state, thanks to the 1836 battle that made it a symbol of Texas independence. Admission is free for all ages.

72-hour cancellation notice required prior to check-in or reservation is non-refundable; reservations made within cancellation window are non-refundable. No-shows will be charged total Groupon rate. Traveler name must match ID at time of check-in. No refunds will be processed by Groupon after check-in. Must be 21+ to check in. Credit card required at check-in. Rates may vary by date and are subject to availability. Dates cannot be changed once booked; valid only for night(s) purchased.