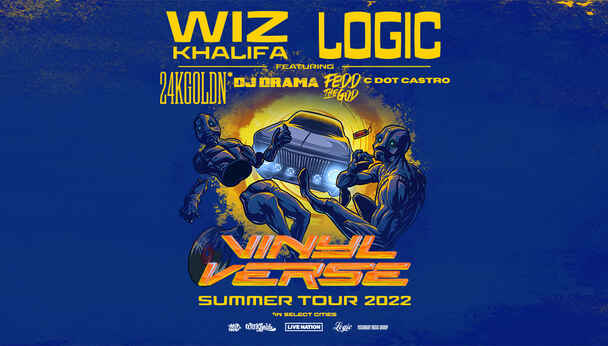 Multi-platinum selling, Grammy and Golden Globe nominated recording artist Wiz Khalifa burst onto the scene with mainstream success with the release of his first major label debut album, ROLLING PAPERS‎ in 2011. ‎ROLLING PAPERS spawned the hugely successful hits “Black and Yellow,” “Roll Up,” and “No Sleep” and gave Wiz the platform to win the award for “Best New Artist” at the 2011 BET Awards and “Top New Artist” at the 2012 Billboard Music Awards. Since his emergence in 2010, multi-platinum GRAMMY® Award-nominated Logic (aka Sir Robert Bryson Hall II, aka Bobby Hall) has separated himself from the pack as one of the most prolific and prevalent artists of the past decade, a New York Times Bestselling author, and a positive force for change. The Maryland native progressed from a now-legendary run of mixtapes to three No. 1 albums, two GRAMMY® Award nominations, dozens of gold and platinum certifications, sold-out arena tours on multiple continents, and 6 billion streams and counting.

View All Deals Near Bristow
Scroll