Private and Group Guitar and Music Lessons from Dave Gorin Music (Up to 72% Off). Choose From Three Options. 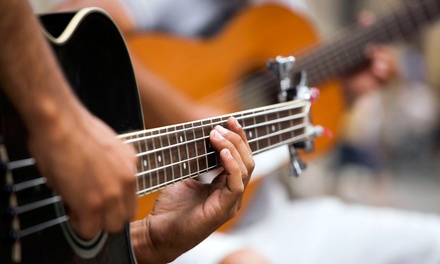 Music and everything else we hear is made up of sound waves. Learn how pressure in the air transforms into sound with Groupon’s explanation.

Like the varying ripples in a pond after you skip a snapping turtle, sound travels in waves. When a guitarist plucks a note, for instance, the string causes the air molecules around it to vibrate, which in turn causes more molecules to vibrate, and on and on until the wave reaches your ears. The differences in the way we perceive these waves—that is, the variations of sound—are largely because of a few key characteristics:

Though humans only evolved ears to make wearing funny glasses possible, the organs happen to bear a key side effect: they are delicately, exquisitely attuned to receive—and translate—sound waves. The dish-like shape of the ear helps direct the waves into the ear canal, where they eventually strike the eardrum—a thin, tiny membrane that vibrates at the same amplitude and frequency as the waves themselves. Next, a trio of tiny bones in the middle ear—in fact, the tiniest bones in the entire body—move in tandem with the vibrations, thereby transferring the pressure waves into mechanical energy.

From there, the wave travels through the fluid contained in a coiled tube known as the cochlea. This tube is lined with microscopic hair cells, each tuned to a specific frequency. When the frequency of the wave matches the right hair cell, a nerve impulse sends a message to the brain to interpret the sound. Through this instantaneous process, the transformation of air pressure to sound is complete, and we finally perceive the invisible miracle of a siren blaring at 3 a.m.

Appointment required, same day appointments accepted. Subject to availability. Merchant's standard cancellation policy applies (any fees not to exceed voucher price). Limit 1 per person, may buy 1 additional as gift. Limit 1 per visit. Valid only for option purchased. May be repurchased every 30 days.

View All Deals Near Medford
Scroll