Painting Party for 10 People, Painting Class for One, or a Private Painting Lesson at Gallery 66 (Up to 42% Off) 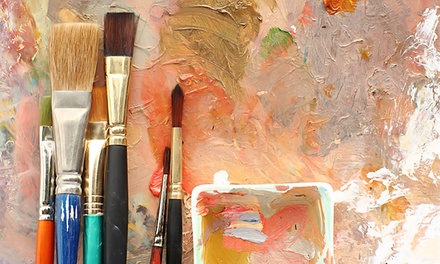 An instructor guides participants in creating their own works of art during a private lesson, a class, or a party for 10 people

Some of the painting techniques you might practice stem from the impressionism art movement. Learn why its pretty pictures were once shocking with Groupon’s introduction.

Before Monet, Degas, Renoir, and Pissarro were household names, they were anonymous by choice. In 1874, under the aegis of the Anonymous Society of Painters, Sculptors, and Printmakers, they launched an independent exhibition marked by works whose soft lines seemed to ripple with light and motion like canopies of leaves in wind and sun. Although it may be hard today to see anything but bright, breezy beauty in Monet’s haystacks or Mary Cassatt’s mother-daughter pairs, the style came as a shock to the art critics of the time, who were used to sober color palettes and meticulous attention to realistic detail. Now, however, the painter’s hand and materials asserted themselves on the canvas in short brushstrokes and a suggestive rather than restrictive approach to lines. Although that first exhibition included the Monet painting Impression, Sunrise, the hazy harbor scene would not have come to name the entire movement if not for one of its detractors. In a review, the critic Louis Leroy threaded a litany of complaints around the term “impressionist,” sniffing that “wallpaper in its embryonic state is more finished than that seascape.”

Impressionism focused on naturalism, but a form of naturalism unedited by distaste for the encroachment of technology and city life. Images of landscapes, city scenes, families enjoying leisure time, and ballerinas stretching for rehearsal show affection for the messiness of earthly life. After the main movement dissolved, artists continued using many of its techniques, forming a body of emotionally vibrant work that came to be known as postimpressionism. In its informal hall of fame are such luminaries as Vincent van Gogh, Georges Seurat, and Paul Cézanne.

Paint classes are a minimum of 10 people. Paint party is 4 hours long with 2 hours of painting. Tables, chairs, tablecloths included. All options include paint, canvas, and instructor. Extra fee for additional guests. Reservation required. Limit 1 per person. Valid only for option purchased. Not valid for clients active within the past 6 month(s).

View All Deals Near Bethany
Scroll