Haircut, Shampoo, and Style with Blow-Dry, Partial Highlights, or Color at Hiwot Studio (Up to 49% Off) 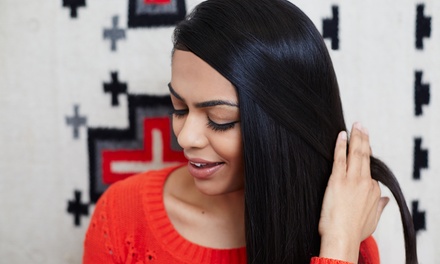 Hair stylists use a combination of hair coloring, cutting, and texturing techniques to change or maintain a customer’s image

One popular option for a short style is the pixie cut. Trace its history with Groupon’s exploration of the style.

Cecil Beaton, writing in Vogue in 1954, called it a “wispy monkey-fur fringe.” And that was on Audrey Hepburn. He said it with affection, however: the pixie cut gently framed the forehead and showed off the inimitably captivating features of the style icon. She’d debuted the do to a national audience in Roman Holiday a year before, setting off the first wave of the spritely hairstyle’s popularity. The close-cropped look is trim around the sides of the head and a bit longer on top, with soft or slightly choppy layers ranging anywhere from one to three inches; it tends to work best for straight or wavy hair. Side-swept bangs often add a feminine touch to the style, and are often recommended by stylists for those with especially delicate or especially strong features.

Though the pixie cut may have never become as common as the bob or simple long layers, it’s maintained a consistent cultural presence throughout nearly every decade since Hepburn wore it, from Twiggy to Mia Farrow (who cut hers herself with nail scissors) to Winona Ryder to Halle Berry. And despite its substantial history, adopting the cut is still often seen as a bold statement: it’s almost guaranteed to make the gossip or style pages when a starlet such as Miley Cyrus chops her locks.

Appointment required. Additional fees may apply depending on hair length, texture, and thicker all over color. Merchant's standard cancellation policy applies (any fees not to exceed Groupon price). Limit 3 per person. May be repurchased every 365 days. Valid only for option purchased. All goods or services must be used by the same person.

View All Deals Near Bethesda
Scroll