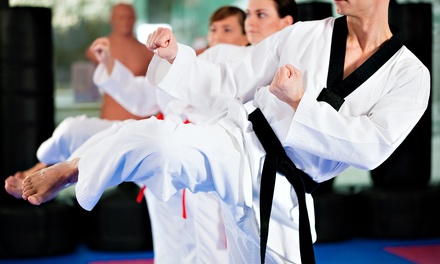 Studio staffed by six instructors, five of whom are grand masters

When learning tae kwon do, you might be studying only one of two versions of one of the world’s most popular sports. Here, Groupon takes a look at how tae kwon do evolved into its current forms.

Known as “the way of the foot and fist” in Korean, tae kwon do is one of the world’s most popular martial arts. Based on a combination of karate and an ancient Korean self-defense style called tae kyon, the sport as we now know it was originally developed in South Korea in the 1940s by Choi Hong Hi, a founder of the country’s military and an eventual war hero. Choi Hong Hi wanted practitioners of his martial art to balance mental and physical discipline, so his version heavily incorporates repetitive patterns of punching and kicking known as hyung, moves which are as calculated and rehearsed as they are reactive and defensive. Another version of tae kwon do, sanctioned by the World Taekwondo Federation, puts less of an emphasis on spiritual growth, instead highlighting the physical aspect, especially kicks. Because of the high physical demands, WTF fighters usually wear pads around their head and torso for protection from competitor’s blows and stray bees.

When Choi left South Korea for Canada in the 1970s over political disagreements, he moved his style’s governing body—the International Taekwon-Do Federation—there as well, leaving the WTF to continue its approach in South Korea. As a result, the WTF version is arguably the more popular iteration of tae kwon do in the world today. Since Choi’s passing in 2002, leaders of both the ITF and the WTF have met to consider joining the two branches, but the differences largely remain intact, forever sparring for worldwide supremacy.

Must sign waiver. Younger than 18 must have guardian-signed waiver. Limit 1 per person, may buy 1 additional as gift. Valid only for option purchased. All goods or services must be used by the same person. Excludes Little Dragons Program.

View All Deals Near Moore
Scroll