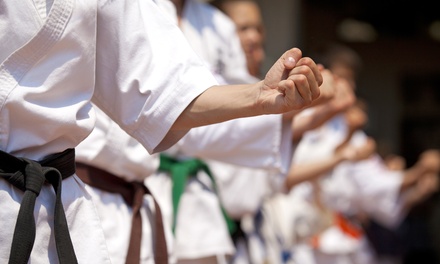 When you practice martial arts, your hands become much more than the imperfect bowls you drink from. Sip from the cup of glory with this Groupon.

Martial-Arts Belts: Working Your Way Up the Rainbow

Brand-new martial-arts students begin with the blank slate of white belt. Learn where they go from there with Groupon’s look at martial-arts belts.

There’s an old story about the evolution of the system of colored martial-arts belts: donning fresh white belts at first, trainees would let them darken over time with sweat and dirt, until, after years of increasing mastery, they turned almost black. If it sounds like a story that's too good to believe, it almost certainly is. Although the belt system is conceivably an ancient tradition handed down from sensei to sensei, its origins can be readily traced to the early 20th century. That’s when Dr. Jigoro Kano was developing a new form of physical education for Japanese public school students: judo, a safer version of the jujitsu fighting style. Facing an influx of new students, he devised a hierarchy of colored belts to illustrate their progress at a glance rather than having to ask each one to fight him every day.

Not valid for clients active within the past 6 month(s). Limit 1 per person, may buy 5 additional as gifts. Valid only for option purchased. Registration required. Classes must be activated by the expiration date on voucher, classes must be completed within 3 months of activation. Brazilian Jiu-Jitsu classes at the Sayville location are adults-only. Classes at the Sayville location must be taken consecutively.