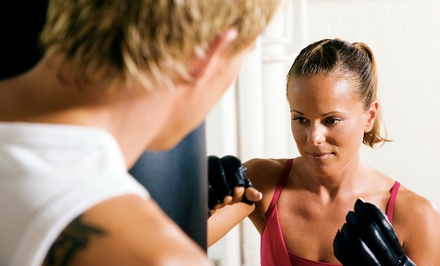 ####Three Things to Know About Kickboxing

3. It’s not that old. Kickboxing is quite popular in Thailand, which is also home to Muay Thai—a form of boxing, practiced as a regulated sport since the late 19th century, in which fighters don gloves and other pads. In 1966, a Japanese karate promoter became infatuated with Muay Thai—and particularly the full-contact striking that’s not allowed in karate—and saw an opportunity to blend the styles. He prepared three karate fighters to take on Muay Thai specialists, and the competition was fierce enough to inspire the birth, a few years later, of kickboxing as an organized sport.

Not valid for clients active within the past 6 month(s). Limit 6 per person. Valid only for option purchased. Classes must be activated by the expiration date on voucher, classes must be completed within 3 months of activation.